These results are from Monitoring the Future (MTF) which is conducted annually by the University of Michigan’s Institute for Social Research since its inception in 1975 and is supported under a series of investigator-initiated, competing research grants from the National Institute on Drug Abuse.

Even with the good news that alcohol use is way down among all middle- and high-school grades, any binge-drinking is too much. Binge-drinking is defined as having five or more drinks in one sitting. It’s an objective measure. 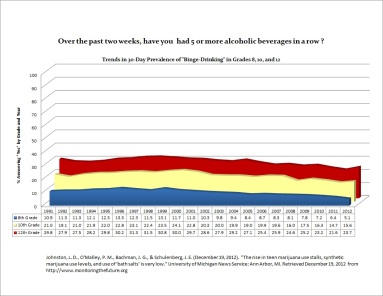 We’re glad to see only 5 percent of 8th graders report binge drinking. It once was as high as 13 percent. However, for the older students, the drop in reported binge drinking rates has slowed over the past twenty years, and are now stubbornly stuck between 15 and 18 percent for 10th graders and between 21 and 26 percent of 12th graders. It’s alarming to learn that almost 1 in 5 say they’ve “binged” in the past two weeks.

Why binge drinking rates have responded less dramatically to societal and legal efforts, as has overall use, is the number one concern among underage drinking experts. Proponents of broader laws, like SHLs, and greater resources shifted toward law enforcement, believe we need to cast the widest and strongest preventative nets possible. Proponents of lowering the drinking age believe that binge drinking occurs when kids drink hurriedly, in hidden places, trying to avoid getting caught. Some statisticians argue that the use of five or more drinks in one evening is a badly chosen measure, since having five drinks over the course of an evening with a meal and dessert will not cause great inebriation in full-grown adults or college students. That caution doesn’t hold true when we’re talking about middle and high school students. Addiction experts know that some percentage of us are going to abuse alcohol, whether we are genetically or culturally inclined. How to identify potential addictive personalities to forestall or prevent addiction is the purpose behind many university and government studies.

The three graphs about getting drunk or high from alcohol are asking for the students’ perceptions. The same answer can come from a student who has had six beers in one night or another who got tipsy from the sacramental wine at services. Like the binge-drinking rates, rates of drunkenness have been bobbling back and forth the past few years. Drinking to get drunk is still the goal for 28 to 45 percent of 12th graders and has been “achieved” by 35 percent of 10th graders and 54 percent of 12th graders. Regardless, it’s good news when self-reported drunkenness measures have dropped across all ages and time periods in the past twenty years. 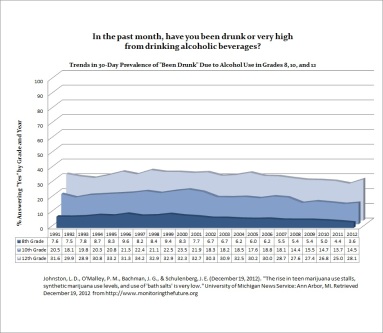 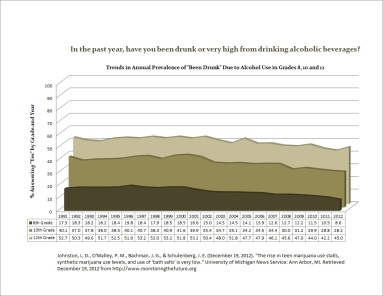 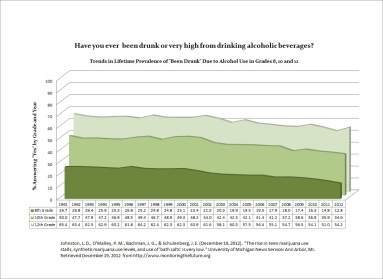