This data is from the Youth Risk Behavior Surveillance System (YRBSS) which is a bi-annual study from the Centers for Disease Control and Prevention. YRBSS monitors six types of health-risk behaviors that contribute to the leading causes of death and disability among youth and adults, including alcohol use.

While the 2011 YRBSS report confirms that high school students’ alcohol use is still on the decline, this study’s data is not as dramatic or as positive as the other recent studies were. The biggest news is that, for the first time in the history of this study, the majority of high school students say they haven’t had any alcohol to drink in the past 30 days, from 51.6 percent of seniors to 70.2 percent of freshmen!

Overall, the most recent report, which was released in late June 2012, supports the results found by the other two major studies.  All three studies demonstrate clearly that current alcohol use by high school students has been falling for the past two decades. In the YRBSS survey, it has dropped by 19.2 percent among seniors, 21.7 percent by juniors, 25.3 percent among sophomores and 27.1 percent among freshmen.

Although the YRBSS study also reports that lifetime trial of alcohol by high school students has dropped since 1991, the results are still worrisome. When almost two-thirds of high school freshmen say they have already consumed more than a few sips of alcohol, we know it can’t all be due to religious reasons and we doubt that it was done with their parents’ permission. 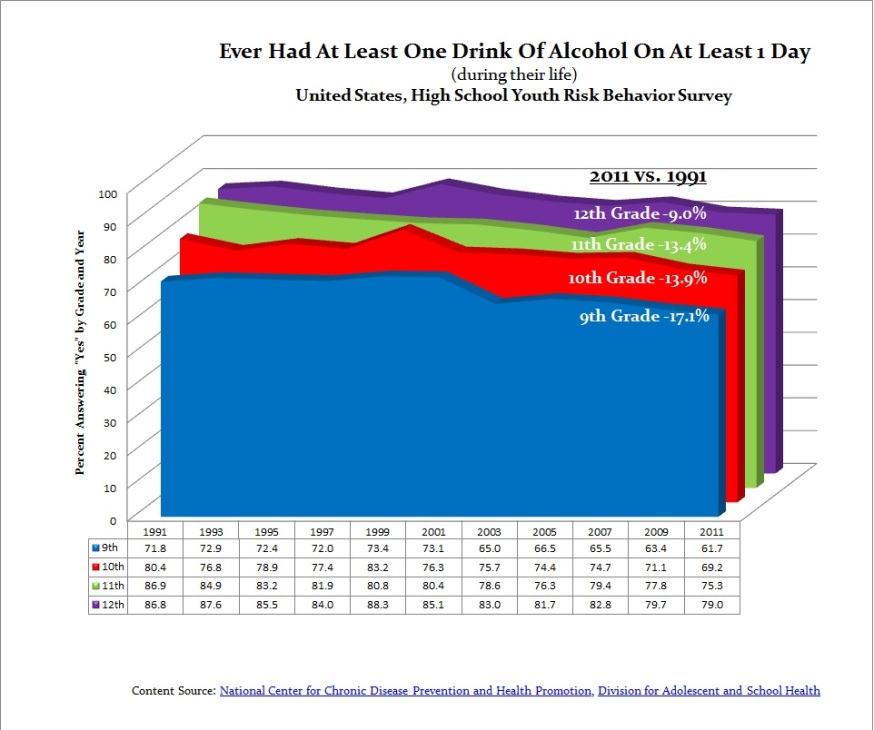